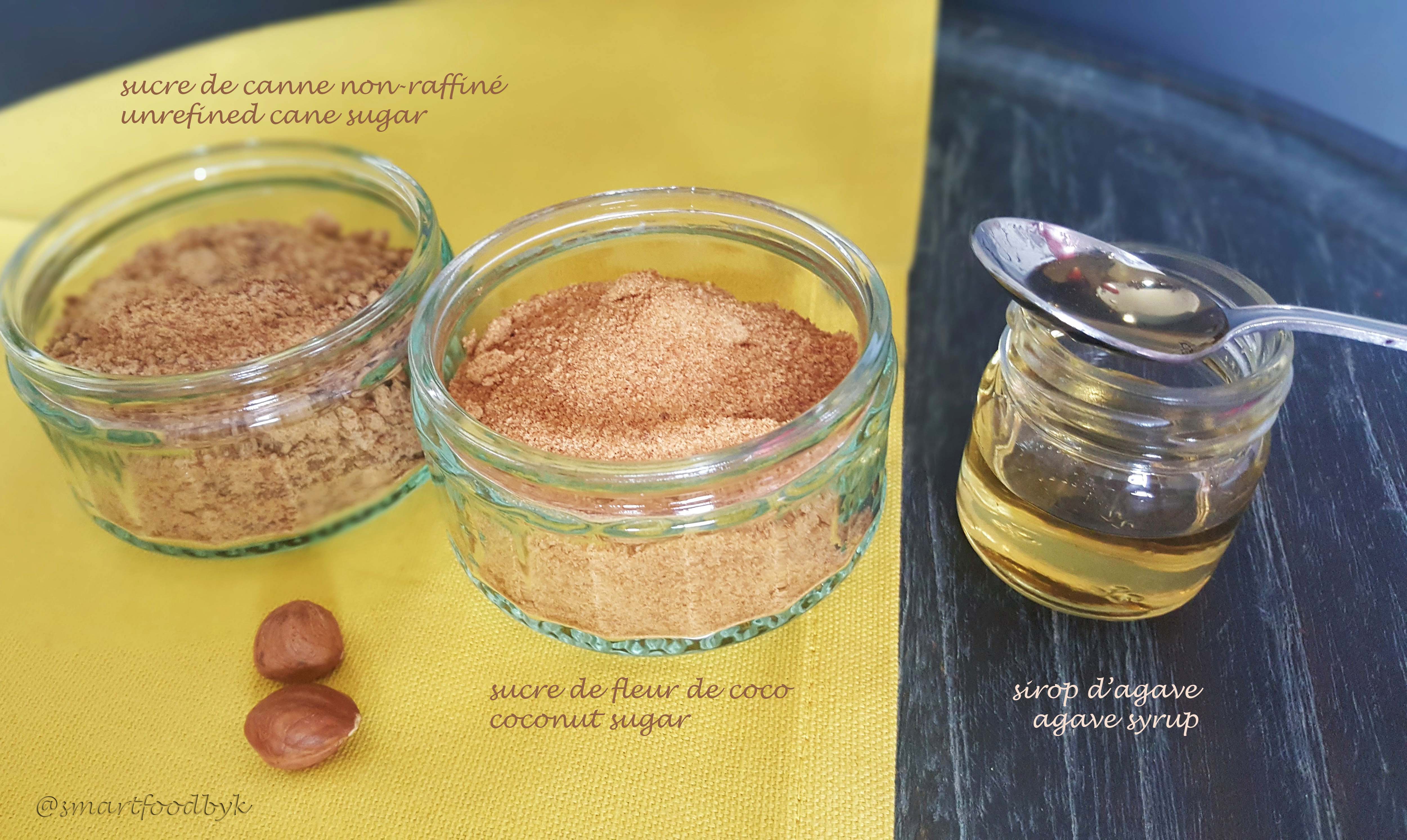 Sugar made from beets, most frequently found in retail stores, is naturally white but also naturally poor in nutrients. White refined sugar is basically empty calories with a quite high glycemic index* (68). It is deprived of all nutrients by a complex industrial “cleaning and crystallising” transformation process. Furthermore, numerous studies prove that it is as addictive as cocaine.

*GI represents increase in blood sugar level two hours after consumption of food. According to the University of Sydney (the worldwide IG reference) low GI is inferior to 55, moderate is between 56 and 69, and high superior to 70.

I replaced it with:

Of a somewhat granular and slightly moist appearance, it is made directly from the sugarcane sap. Since it keeps all the nutrients contained in the sap, it is rich with mineral salts, vitamins and amino acids. It has a subtle caramel flavour, a strong sweetening power and less calories than its white refined cousin (350kcal per 100g versus 400kcal per 100g of its refined white version).

*The term “rapadura” comes from Latin America. The same type of unrefined product coming from The Philippines or Mauritius is called “muscovado”.

NB: Unrefined cane sugar should not be mistaken for “cassonade” or “brown sugar” which is usually of the same colour and similar flavour but nevertheless refined and very poor in nutrients. The majority of “brown sugars” available in stores are nothing else but white sugar with a bit of molasses added to it. If you want the right product, look for the word “unrefined” or “raw” and preferably “organic”.

Made from the coconut flower sap, this sugar is rich with potassium, polyphenols, trace elements and various B vitamins. It has a glycemic index of 54 (lower than cane sugar) and a subtle exotic flavour that sometimes makes all the difference in a cake.

Agave syrup has a strong sweetening power with a low glycemic index of 20 when it is pure. It can be much higher if a product is of lower quality. It naturally contains iron, calcium, potassium, magnesium, mineral salts and silica. Associated with calcium, the silica helps prevent osteoporosis. Agave syrup is of a neutral flavour and has less calories than sugar.

Maple syrup is rich with vitamin B2, proteins and minerals like zinc, calcium, potassium, magnesium, iron, manganese. Its glycemic index is between 54 and 65 and it weighs only 260 calories per 100g.

Whichever of these options you decide to go for, you should be moderate about it. Sugar contains a considerable amount of calories that are easily transformed into body fat especially when combined with animal or plant fat. Thus every little helps, for example, I always lose a third of the quantity suggested in a recipe and the taste is still sweet enough.

I almost never use honey to sweeten my desserts simply because I consider it too expensive. I choose to buy organic honey of controlled origin which is always more costly than the regular brands from the supermarket, so I save it for our warm bread and butter weekend breakfast. Honey is rich with vitamins, minerals and amino acids but it loses its nutritional proprieties when heated. Its glycemic index is around 55.

This site uses Akismet to reduce spam. Learn how your comment data is processed.

Searching is in progress